Our Walk In Closet

When we were first planning the addition that eventually became what is now our house, the size of it was based on how much room Doug needed in his basement. The main floor was going to be a big music room for me that could double as a small performance space. The upstairs had plenty of room for everything we could possibly want to have up there, including a separate walk-in closet.

I hadn't really given a whole lot of thought to it other than making sure it was big enough to be flexible, and accomodate a window. I figured I'd see how it looked after the wallboard was on and take it from there.

So the plan was to have it sort of evolve, and evolve it did. When we discovered that one of our kitchen cabinet sections was taller than what we had ordered, they sent a replacement and said we should just keep the other one because they had no use for it.

After staring at it for several months it finally dawned on me to use it as a divider in our closet and either get or build some kind of unit to put underneath it. I discovered that there was a Hemnes chest of drawers from Ikea that was exactly the right size and it was nice and cheap so we bought it. 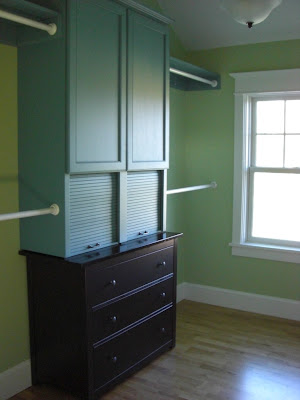 Here's a more detailed shot of the rod and the trim. We used upside down baseboard material leftover from the kitchen and the crown moulding that Doug had ordered that didn't end up working in the kitchen. It looks really nice here - it's too bad we didn't think about the shadows when we installed our recessed lights. Oh well, we can use this moulding elsewhere. 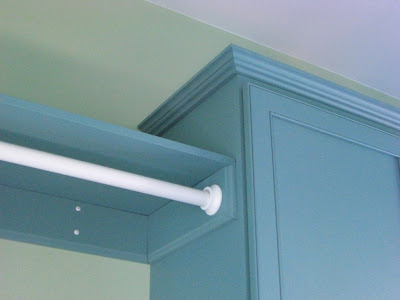 The top surface of the inexpensive dresser seemed a little delicate, shall we say, and prone to scratching easily, so I decided to toughen it up with several coats of polyurethane. It looks a million times better and makes the dresser look much fancier than it is. I sure hope it holds up. 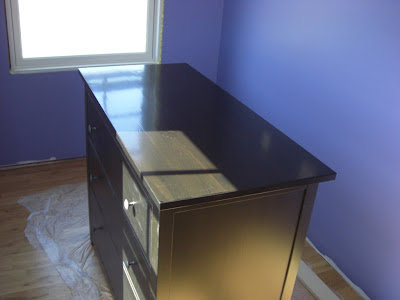 After Doug saw how good those plain old doors in the downstairs hall closet looked after I added moulding to them, he practically ordered me to do the same thing to the doors in our closet. Here's the before picture: 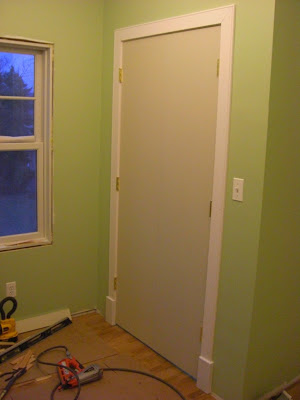 And here are the doors after the moulding and painting and trim. You can also see the very first window that Doug trimmed out. We decided that the closet window was the best one to practice on. I'm very happy with how it turned out. Doug did not try to alter my size specifications and it looks exactly the way I pictured it would - awesome! 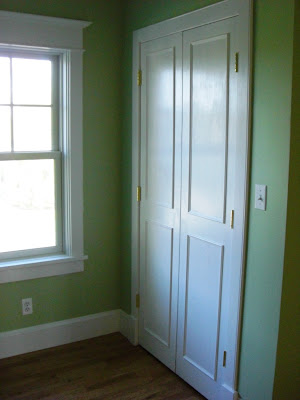 So except for the shoe moulding or quarter round at the very bottom, this room is completely finished now. It is even more finished than the kitchen which is still waiting for its moulding around the tops of the cabinets.

The thing I like most about our closet configuration is that we won't be tripping over each other because our sections are so well divided by that big cabinet in the middle. I think we are going to really enjoy the accessibility of those two levels of rods and it will be nice to be able to keep the stuff we wear less often inside the closet within the closet. I'm very happy with how this room turned out and also with how colorful it is - that's another thing that just sort of evolved.
Posted by Cyndy at 6:52 AM 2 comments:

spurts of work and stops and starts 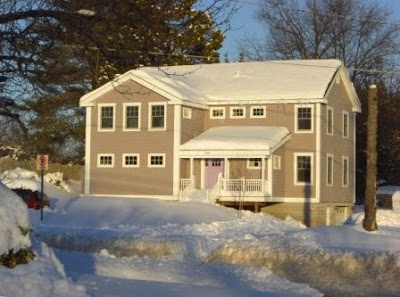 The February snows really did a number on us, so there was no way that we could get all the work done we were hoping to get done by the end of the month. It took forever to dig out of the Cinderblock Chalet and even longer to dig our way into the FoamCoreFantasy in order to continue the work.

We picked up a gig at the beginning of March that turned into a weekly thing and Doug really really really wanted to have a rehearsal in his not-yet-finished basement studio, so that became the priority, which meant that the work we needed to do upstairs in order to move in by the end of February was not going to happen in time.

So we finished that section of the basement, had our rehearsal and then stopped working on the house for a while - so what else is new? I guess we were saving our strength as usual for the big last minute push to the end. Apparently slow and steady is not an acceptable way to pace the activities. There must be dramatic surges and enormous bursts of last minute energy. 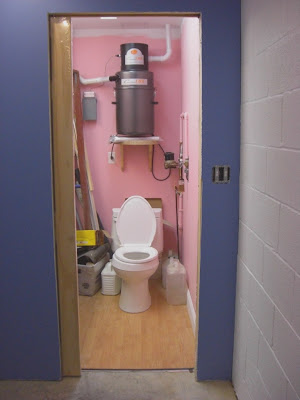 Notice that paint job around the edge of the ceiling - that's proof right there that I didn't paint that bathroom. But I will be fixing this situation as soon as I have a chance! I'm glad Doug likes that purplish blue for his studio. It's kind of dark, but it works okay because he's got such excellent lighting down there and there's lots of white coming from the ceiling and there will be even more from the eventual bookcases.