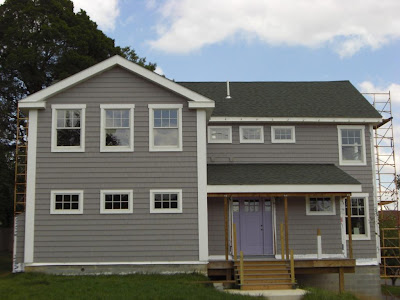 The siding has gotten a little farther along. Doug's been working pretty hard although it probably doesn't look like that much progress has been made. When we are working together we get about 3 times as much work done as Doug does when he is working by himself.

I have about 3 more weeks before my broken foot comes out of its cast and I'm really looking forward to getting things back into high gear. The trimboards were kind of tricky to put up because there is a lot of shimming involved. And as you can see there is still a bit of trimwork left to do in the front. But our goal right now is to get up all of the siding and then go back and finish the trim. I'm so glad he covered those gable boxes though. 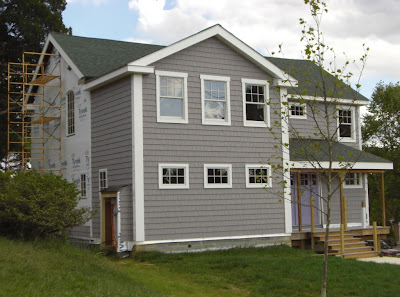 When Doug showed this blog to his friend Steve at the car show, Steve commented that in Canada where he's from they call those little windows like the ones on the first floor "piano windows". I had no idea - I guess my instincts for choosing windows for the piano room were right on target. 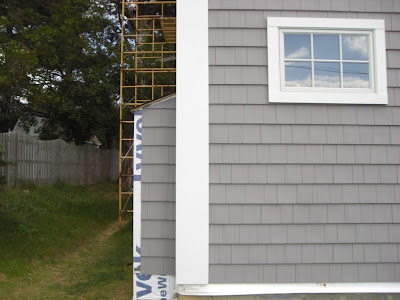 I got Doug to make a little house on the side of the house to enclose all of the utility ugliness. It even has the same green shingles on the roof. There will be a removable panel on the front and a hole to read the electrical meter through. So it won't look like this for too much longer. 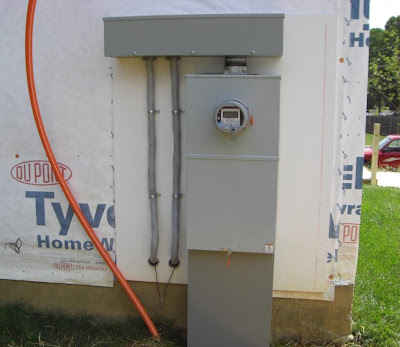 This is our electrical box plus the 3 phase stuff that Doug had to have and the FIOS conduit. The hideousness of all this equipment was driving me nuts, especially since it's so near the front of the house.

Now that the broken bone in my foot is starting to feel a little better, I can see that I'm going to have to get out there in my cast and mow the lawn. I have no experience in nagging Doug to mow the grass since I've always just done it myself. So far, the gentle suggestions have not resulted in any grass mowing action on his part.