our house is at the end of the rainbow 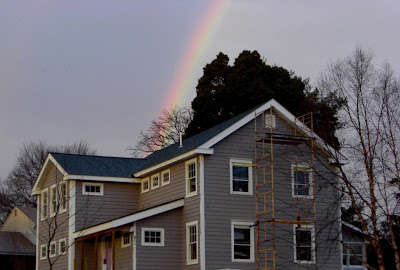 with a big hole in it

Most houses these days have one or two sides that aren't as attractive as most of the rest of the house. On our house that side would be the north side. We had to make some sacrifices in symmetry in exchange for the floor plan - things like closets and stairs were needed on that side of the house. And Doug really wanted to have that gigantic window in the stairwell. It looks great from inside the house, and we are trying to make it look as good as it possibly can on the outside as well.

Doug asked me what I wanted the trim to look like on his fancy-ass gigantic window so I drew him this rough sketch: 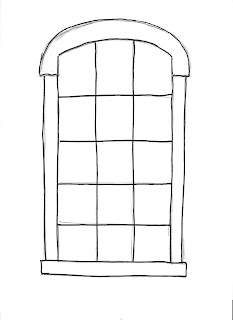 Then he drew it on his CAD program and came up with this drawing, which includes the actual structure of the window itself: 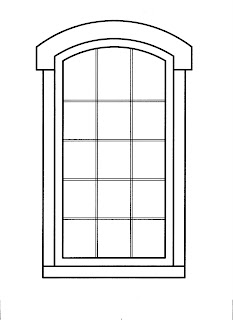 I really liked the fact that he had added the points on the sides of the arch so that the top is completely parallel to the window itself, but I thought that it stuck out too much on the sides from the rest of the vertical trim. He cut it "his" way and I still thought it was too wide, so he cut it down to where I wanted it to begin with and now it looks perfect, I think. 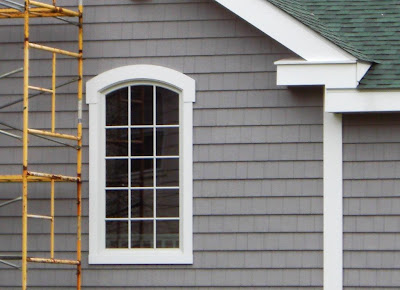 But I can't wait until we can take that damn scaffolding down!!! 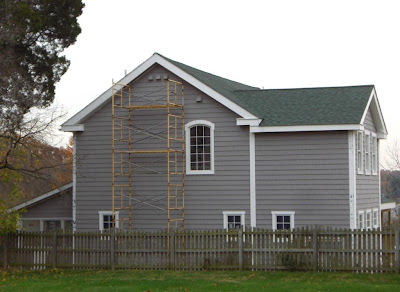 Maybe we should plant a tree on each side so that the lopsided window array is not so obvious! Notice the new gray vents up at the top. They look so much better, or at least a lot more subtle, than that big white patch that was up there before. 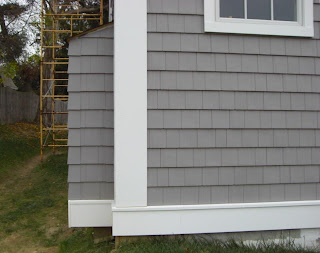 Now we are putting the bandboard trim around the bottom of the house and soon the cornerboards will all be in place too. I'm really eager for all of that Tyvek to finally disappear for once and for all.
Posted by Cyndy at 2:21 AM No comments: