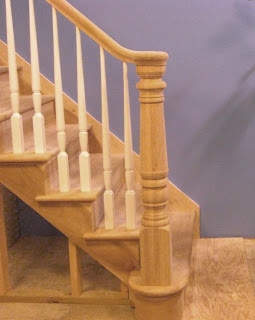 We've been back in our house for almost a year and there are still many big projects left to tackle.  For those who ask how the house is coming along, the answer is either "slowly" or "it's not," depending on my mood and how recently any work has taken place.

Near the end of February Doug went off on another vacation, oops, tour (but to me it's very much like a vacation when you get to go to a warm location, make less money than you would if you'd stayed home, and spend all day relaxing on the bus).  So I decided it was time to do the finishing of the basement steps since he wouldn't be here running up and down them twenty five times a day.

They were starting to show some wear and tear after a year of use in their unfinished state and the newel post had gotten a few large cracks in it that I needed to repair first.  I guess that's proof that we have a really dry basement, so thank goodness for that. 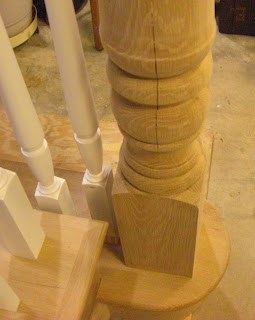 It's not very visible on the picture below, but there were many black heel marks on all of the risers just from one year of use.  That made me start to rethink the practicality of having white risers and stringers and stained treads.  That is the look I want to have for the upstairs steps and Doug wanted the basement steps to match.  Before he left he had moved over to the idea of staining everything to match the flooring, but with a darker banister and newel post. 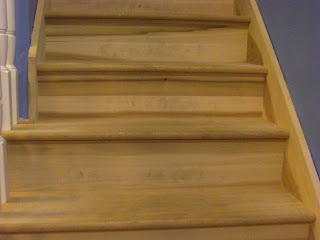 Once I got all of those obnoxious heel marks sanded off, actually while I was sanding them, probably in a inhaled sawdust fueled combination of delirium, anger, and resentment, I started imagining other possibilities for these steps.  I've never been someone who enjoys any activity that involves getting dirty, and there I was, once again, covered in dust and thinking "I don't ever want to do this again and I don't ever want to ever again see heel marks on something I've gone to the trouble to make look so nice."

Staining the risers the same color as the treads would help, but since we'd been planning on painting those risers, the stair place had made them out of poplar and the grain pattern was kind of unattractive, which wouldn't have mattered since they were going to be painted.  If I used the same stain that I used for the oak treads, it might look pretty bad with all those dark stripes in the wood.

Since the inevitable return of the black heel marks was just making me nuts as I sanded them off, I decided to follow through on that mood (nuts) and do something totally bizarre.  This is not my style at all, but I thought Doug might actually like it because he often likes unusual things and the non-tradition style would call more attention to the overly fancy and expensive basement staircase that he just had to have. 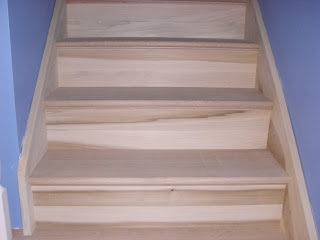 ﻿
So what in the world at 3:30 in the morning was I thinking I might do to solve all of my various issues with these steps?   Stain the stringers and risers the same color as the banister, of course!  They'd match and it would look all coordinated and hide the heel marks!  I'm sure I was on the edge of hallucinating when I decided this, but somehow I decided to follow through and actually do it.

The taping was a huge amount of work, but pleasant enough because there was no dust involved and I could do it sitting down.  Because I'm so lazy.

I tried a few stain colors out on a sample piece of oak, to decide which colors to use.  That didn't pan out too well because the grain on the newel post took the color very differently than the tread sample.  The banister was different too.  The Jacobean stain color that looked so nice on the sample was scary dark on the newel post.  Fortunately, however, it did a fantastic job of hiding the weirdly slanted grain patterns on the risers. 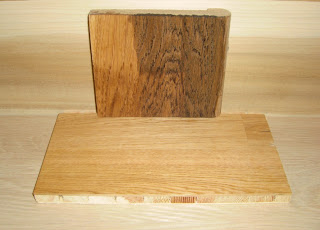 I had to do something about how horrifyingly blackish the newel post looked, so I sanded it some and did some more reading on the internet about the various colors, considered how things would look against the background wall color, and then selected Red Mahogany for the second coat of stain.  Of course I then felt compelled to lessen the effect of the very dark Jacobean stain with even more sanding.  Sanding is very hard on a person's wrists.  I hate sanding!

So I put on the Red Mahogany over the sanded Jacobean.  What a huge relief!  The color is actually halfway decent!  Then I removed all of the tape, and kind of thought uh-oh about how it looked, but it was too far gone for me to permit myself too much remorse so I continued.  The "natural" colored stain that I used on the treads is actually darker than our flooring material over all but it kind of blends in with the darkest parts so I guess it's okay. 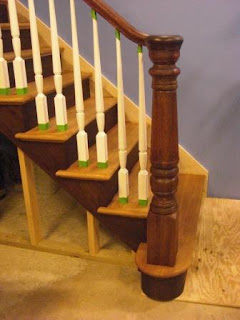 I'm actually pretty pleased with the color on the newel post now.  It almost looks like an antique.  For about a week I went back and forth between horror at what I'd done to Doug's staircase and thinking that it sort of looked interesting and okay.

I plan to paint the sides of the steps white to match the balusters, but I'm not going to do that until all of the trim is up.  Doug wants to make cubby holes under the steps and it makes more sense to do all of the painting in that area at the same time.  I hate to leave it unfinished, but that's the way it often goes around here. 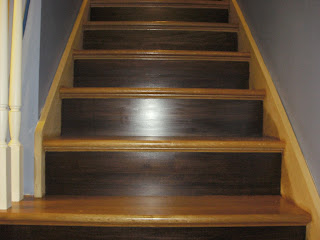 Doug was extremely surprised when he got home and saw what I had done because it was so completely out of the blue and not like anything we had discussed.  It's not quite as dark as it looks in the picture above.  He didn't love it at first (probably because it wasn't his idea) but he definitely wasn't horrified the way I was.  Now he likes it and I do too.  I've actually grown slightly fond of it because it definitely has personality and I might as well like it since I did it.

Putting on the three coats of polyurethane really dressed it up.  The stairs have a sort of furniture-ish look about them now. 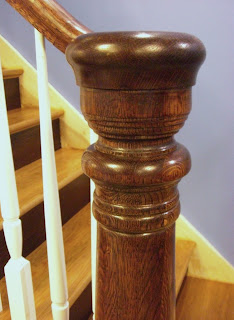 And if you use your imagination, you can see that the newel post looks sort of resembles a trumpet mouthpiece with a very large shank.  Right?  Which is somehow appropriate for heading down into mouthpiece land.  Or maybe I'm still hallucinating from all of that dust I inhaled.

I learned a lot from this experience and I have a much better idea of what I will do for the upstairs steps.  They are the ones that really need to be done correctly so that they'll look good and now I am not afraid.  I think I know what I am doing and I know that I can make them look good, with no surprises.  I'll definitely be sticking to plan A up there.
Posted by Cyndy at 3:25 PM No comments: